Welcome to another bi-weekly installment of the goalWA.net “Off the Pitch” column by Ruth Nicholson. Ruth is a trained mediator and the founder of GO!, the go-to expert resource for youth sports governance and operations.

Now that teams are playing in leagues and tournaments, the uncomfortable conversation about playing time begins to appear. Read on to learn the two key questions that make this conversation less confrontational and more constructive.

One of the most dreaded conversations between players, coaches, and parents revolves around playing time. Nobody likes it.

In my workshops on conflict resolution for coaches and directors of coaching, I ask them to identify the most common types of difficult conversations and conflict they encounter. Consistently across the country, the number one answer is the conversation about playing time.

A playing time conversation should be between a player and his/her coach. A parent’s role should be helping a player frame his/her concerns and preparing for the conversation. If additional conversations are needed, parents may be a part of them in a support role. However, parents should not be the primary spokespeople when it comes to talking to a coach about playing time.

I remember two conversations between my son and his coach about playing time over a decade ago. It was extremely difficult to quell my protective parent persona and tap into the trained mediator part of my brain. In retrospect, I wish one of us had asked my son WHY he wanted more playing time. That simple question could have made those conversations better and more constructive.

The first key question for a constructive conversation is “Why do you want more playing time?”

Asking a “why” question helps people move beyond their entrenched positions, such as “I want more playing time”, and into an awareness of their underlying interests and assumptions. When we ask a player why more playing time is important, we can help the player validate his/her assumptions and how realistic they are with respect to the player’s individual goals.

Consider some of the possible reasons why a player might want more playing time:

The first part of the playing time conversation should focus on the reasons that a player wants more playing time. If a player does not initially share those reasons, a coach can ask the question. “Why” questions can come in various forms, from the blunt “Why do you want more playing time?” to the curious “Help me understand why playing time is important to you.”

When a coach takes the time to understand a player’s concerns, s/he uncovers the opportunity to suggest more than one way to meet a player’s interests. Yes, it can include playing time. It also may include additional options, such as position-specific training or other valuable contributions the player can make to the team. It may also include dispelling inaccurate player (and parent) beliefs about what playing time can and cannot accomplish with regards to an individual player’s goals.

Beginning with a discussion of why a player wants more playing time empowers a coach to tap into his/her skills, expertise, and knowledge of the variety of ways that can address the player’s goals.

The next part of the conversation concerns the player and his/her commitment to the game and to the team.

The second key question for a constructive conversation is one that players should ask their coaches: “What do I need to do to earn more playing time?”

An important part of a coach’s job is to identify who will play what positions at what time during a game. A team roster includes more players than are needed in the game at any one time so that there are substitutes available. So, by design, not everybody on the team can play all the minutes in a game.

On recreational teams, there may be a requirement that every player play a certain minimum amount of time. However, even these requirements may be based on a player following team rules about attending training sessions and arriving for games on time. On more competitive teams, playing time may be awarded on the basis of both following team rules and on competition for various positions among the players on the team. Players are rarely entitled to a guaranteed amount of playing time.

Players are empowered to take the initiative to work diligently and improve themselves. The power behind a player asking a coach how a s/he can earn more playing time does three things:

The time and location of the conversation can have a significant impact on how well it goes.

Avoid locations that are within earshot of other people, including other players and parents. The playing time conversation should be between an individual player and his/her coach. It is not the business or concern of other players or parents.

Also consider the timing of the conversation. I recall making the mistake of agreeing to talk with my son and his coach in the parking lot near a soccer field right before a training session. We all felt the tension of needing to finish the conversation before practice started. In addition, it had the potential of increasing the pressure on both as they took the field with the other players after our conversation. The timing did not allow either of them to think about the conversation, consider what they had learned, or to prepare to make any changes to which they may have agreed.

Meeting after a game or training session near the field offers its own challenges. Imagine trying to have the playing time conversation while other players are waiting for you to finish so the carpool can go home. 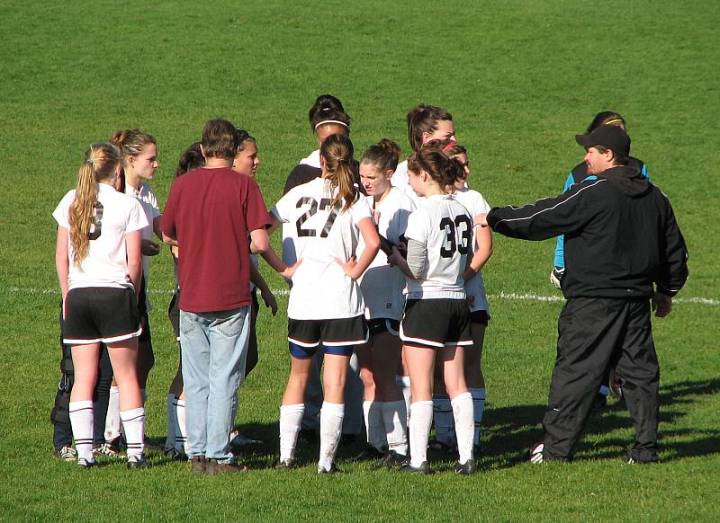 Tips for a Constructive Conversation

Ruth Nicholson is a trained mediator and the founder of GO!, a 24/7 Asset and Training Library offering youth soccer organizations proven leadership and administrative tools. It includes resources to constructively resolve conflict. To download a description of the five levels of conflict, click here: Conflict Scale.